The Baby celebrated turning seven months old yesterday by perfecting his brand-new skill of pulling himself to stand in his play yard (read: baby jail) and taking his first standing up dump. (Sorry, grown up The Baby. Sometimes you have to overshare. You’re welcome I don’t use your name.)

In the same vein as my other milestone posts, here’s a quick stream of consciousness list about this particular moment in our lives. 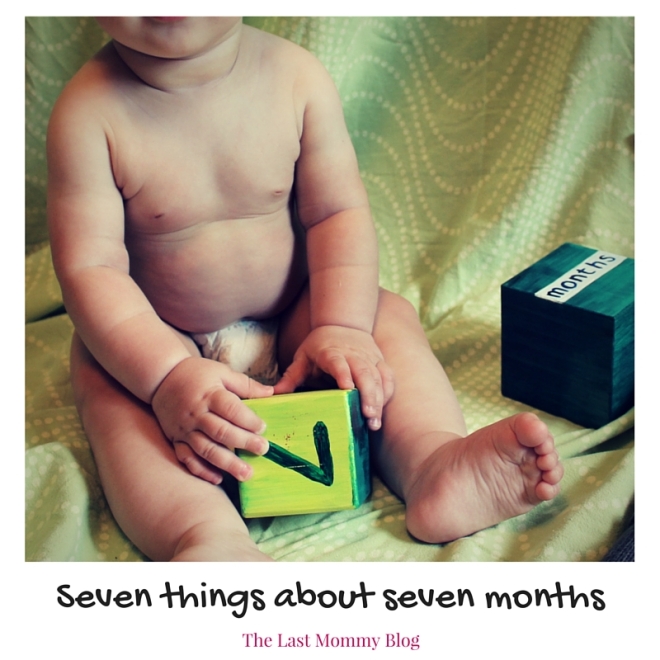 There you have it! My baby is torpedoing toward toddlerhood and I’m just trying to keep up. 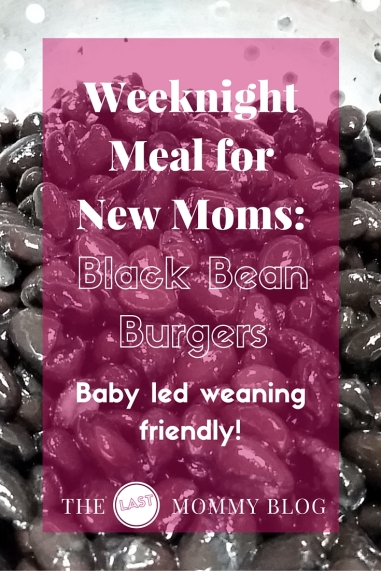 Finally, the return of my extremely popular not-really-recipes food series for haggard new parents. I hope you all weren’t starving in the meantime!

Kind of a good-news/bad-news situation here.

The bad news: This is varsity-level effort for new parents. Something I’d recommend you work on during a Sunday afternoon while you have some extra help with the baby. (What can I say? I never thought the day would arrive, but it does start to get easier to cook when your baby can  entertain himself on the floor for awhile.)

The other bad news: This is a great example of what I refer to as “improv cooking” which means I didn’t measure anything and used leftovers in the recipe, so… good luck. Be creative. You’ll be fine. I adapted my recipe from the Pioneer Woman who clearly pays closer attention to her cooking than I do (and has stronger forearms and/or forks). 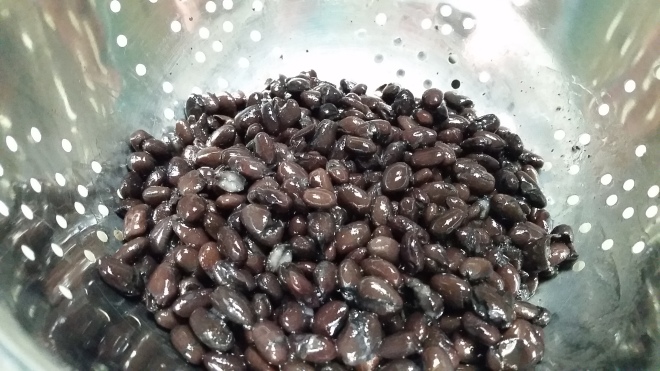 Mash them up in a bowl so they’re still chunky but smashed enough to stick together well. The Pioneer Woman used a fork but I guess my arms aren’t strong enough for that.

Meanwhile, toast some bread. I used four pieces of whole wheat bread, but three of them were butts. Making your own bread crumbs is another good way to control salt, but if you can find low sodium breadcrumbs (and I’m leaving it entirely in your hands to do your BLW/sodium research), skip this step. (If you don’t like the state of my toaster oven, you should see my office hahahaha someone please come clean my house.)

Let your toast cool off a few minutes so it doesn’t steam up, then grind it up in a food processor/bullet/etc.

Add to your black beans: The breadcrumbs, the herbs and garlic, a half teaspoon or so of chili powder (The Baby seems to like a little spice, but I didn’t go nuts on this recipe), the egg, a shredded small beet and a shredded small onion, and if you have it, some leftover mashed potatoes. (Mine had sauteed onion, zucchini and peas in it from some zucchini boats I made the night before. Salt reminder goes here.) 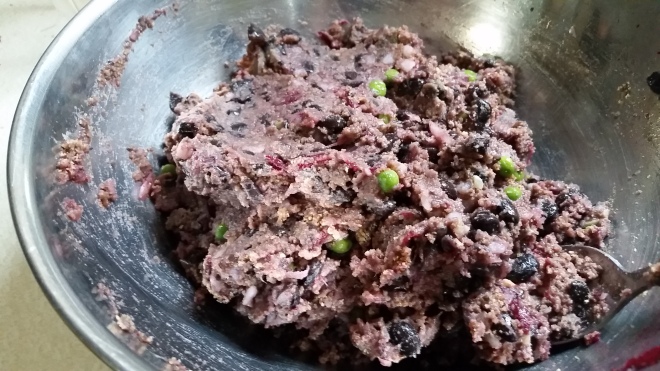 Mix well and let sit for a bit. (The beets make it look like bloody red meat a little, don’t they?)

If you’re giving some to baby, pull out a portion to leave unsalted, then add kosher salt to yours.

Heat a cast iron skillet and add a little canola oil (I also used some butter – aim for unsalted, said the broken record.) I’m getting used to a new stove (backdoor brag) so I got the pan a little too hot. Don’t be like me. Cook your burgers thoroughly on both sides. If you’re planning to freeze any, turn the heat down so they’re good and cooked but not super browned.

To serve, melt some cheese on your burger, then put it on a bun (or two pieces of bread if you’re improv cooking and don’t believe in grocery lists). Add mustard and baby spinach and enjoy.

Here’s The Baby’s portion. The cheese helped hold it together a little, and because I was cautious about how much salt was in the burger itself (and he didn’t have anything else with salt in it that day) I didn’t feel nervous giving him any.

I froze the leftover portions first on a cookie sheet then wrapped them up and put them in a freezer bag. I’ll just turn the pan on nice and low and cook them from frozen the next time we eat them.

Bon apetit, my dear mamas. I know this is a more time-consuming recipe, so if you can’t pull it together, may I offer an alternative *recipe from my earlier days:

*Not suitable for BLW.

I hadn’t heard about Baby Led Weaning until I was pregnant and a friend asked if I planned to try it, but once I started reading about it, I was committed. It makes a lot of sense to me that babies should be given lots of variety, and the agency to decide what they want to eat and how much of it. As someone who was fed purees as a baby and grew into a kid who didn’t eat anything but peanut butter and jelly, mashed potatoes and chicken nuggets until basically college, I wanted to give The Baby every opportunity to start off on the right foot with food.

When I explained to my mom what BLW was, you’d have thought I was explaining how I was going to feed The Baby lit firecrackers and broken glass. When she was raising kids, purees were the only way to go because choking.  (As the BLW book explains, gagging ≠ choking, and babies gag easily and regularly as they figure out how to manipulate food in their mouths. As long as you’re supervising and not giving them nuts, whole grapes or other obvious choking hazards, they’re going to be fine.)

And while my mom still is adorably cautious about the whole ordeal (she peeled cherries for The Baby and then proceeded to cut them into pieces about the size of a small booger), I think at this point her delight in The Baby’s messy, exuberant dinners has diminished her fears about having to rescue him from a too-big piece of food.

This all started about a week ago. Although The Baby has been advancing pretty rapidly developmentally, sitting up with very little assistance needed, putting anything in sight in his mouth and gnawing on it with his gums, everything I’ve read has said not to start BLW until baby hits the six month mark, that any earlier than that is just too early for the baby’s digestive system and can up the risk for choking.

But I was holding a fussy The Baby at the dinner table during family dinner on Sunday, trying to finish up my corn on the cob so we could get him to bed, when he grabbed the other end of the corn cob and started chewing and sucking on it with the determination of a starving dog.

After that, The Husband and I tiptoed around the fact that this particular baby was leading us headlong into a new phase, trying to stick to the 6-month recommendation. The Husband would surreptitiously let the baby suck on the bitten side of a whole apple; I’d offer a chunk of banana in the mornings after TH left for work. Finally, unceremoniously, we gave in and started offering food on the regular. Each day The Baby has tried something new, and each day he has impressed us with his enthusiasm for whatever’s on the table (and his capacity for making a gigantic, gigantic mess.)

Here’s a short list of things The Baby has *eaten so far during his short but promising career:

So far, he hasn’t outright rejected anything, though the texture of cheddar cheese threw him a bit, and the tartness of some fruits makes him go a little walleyed. I’m really happy we opted to go this route and can’t wait to continue exploring new tastes and textures with my favorite little gourmand.

As a bonus, his eating our dinners has forced me to step back toward healthier meals from my exhausted and defeated approaches to dinner in the recent past. Someday soon I’ll revisit Weeknight Meal Wednesdays with a BLW-friendly meal.

Join the conversation: Did you go the BLW route? What were some of your baby’s favorite foods? Any tips for someone just starting off?