We recently checked out from the library If You Give a Moose a Muffin, and The Toddler loves reading it (along with the OG If You Give a Mouse a Cookie.) While I haven’t posted a recipe here in about 100 years, we just succeeded in a small baking experiment that works for killing some time, delighting a toddler, connecting literature to real life and prepping breakfast for the week, all in one.

If you’re anything like me, it also provides your young baker a lesson in flouting the specific measurements of any given baking recipe and enjoying or suffering the consequences. (Fortunately, this turned out pretty good!) I’ve never been one to closely follow a recipe, so consider this a basic roadmap from which you can detour depending on what’s in your pantry and what your family likes to eat.

The Toddler gobbled a few mini-muffins up as soon as they were cool enough to eat, and seemed pretty impressed that his pouring and mixing turned into food. He even helped clean up afterward!

I kept these pretty low-sugar so I wouldn’t feel guilty about serving them for breakfast and didn’t add any oil (though I use whole milk/yogurt in my muffin recipes and entire eggs.) I do find that the no-oil muffins I make tend to stick to the muffin cups/tins more than usual, so don’t be afraid to be a little liberal when greasing them.

Finally, thanks to The Husband for being a second set of hands during this activity; it’s doable with just one adult, but a nice weekend-morning family activity. (If you’re doing this solo, try to gather everything up before your little one is waiting anxiously to get started or you may run out of attention span.) 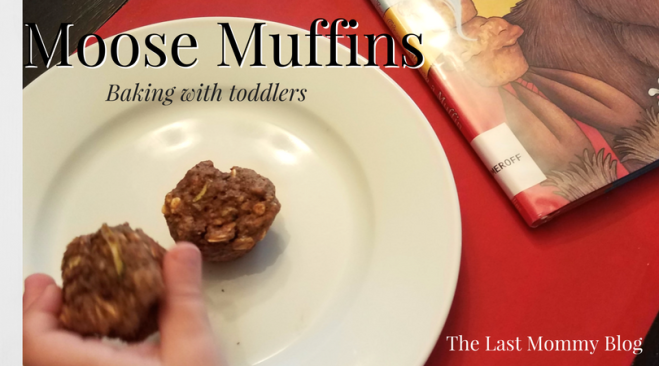 Happy Labor Day weekend, everyone! Happy 28th birthday to my little brother (and to my mom, and to all the other mothers who are or have taken the name of this holiday quite literally to mean welcoming new babies to the world.)

This weekend we did a whole lot of cutting up fallen trees and felling damaged trees from the crazy storm that swept through our property. One very sad casualty was the 100-year-old apple tree right off our back porch that was crushed by a rogue locust tree the guys cut down. Their guide rope snapped and the tree ended up just brushing our gutter, but annihilated the apple tree. It was on its last legs, propped up with an old post, but we were hoping to keep it alive another season to try to graft it. It had been planted by my great grandfather.

Anyway, as it’s not particularly safe to operate a chainsaw with a baby on your back, my contribution to the storm cleanup this week was trying to preserve the windfall of pears that had been blown from our trees in the storm. They were slightly underripe when I picked them up off the ground, but at the same time almost universally bruised or cracked from their fall, so it was a race against the clock to get them processed.

I took zero photos and have no recipes to share with  you. The Baby has been napping for two hours (!!!) and is due to wake up any second, so here’s just a short list of things I made with the pears:

All in all, I was able to save about 10 pears that were undamaged and could ripen and be eaten raw.

So that’s been my weekend. I find myself getting a little overwhelmed during harvest season, not wanting anything to go to waste but also not wanting to spend all waking hours blanching tomatoes and making pepper jelly (another thing I did this weekend), but it does make winters nicer to have access to this stuff, and it sure helps our budget while we’re living on one income, plus whatever I can earn freelancing.

I’ve got a little pear sauce left. Anything else I should try to make with it?